At SEMA in Las Vegas, Honda announced that the new K20C1 from the Civic Type-R can be purchased on its own, independent of the rest of the car. 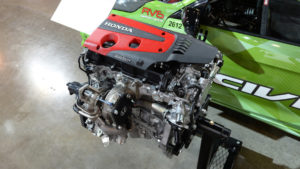 The engine is a turbocharged beast, rated at 306 horsepower and 295 lb-ft of torque. While it may be a far cry from the high-revving naturally aspirated VTEC motors of years past, it makes the new Type-R one of the fastest front wheel drive cars in production today.

For the first time in the United States the turbocharged 2-liter can be yours for $6519.87 before tax and shipping. Previous Type-R engines, like the Civics they lived in, were offered only in Europe and Asia, now that the car is available here, so is the crate motor. Unfortunately, you can’t put it in your street car, Honda asks you to verify that you’re using the engine for a sanctioned racing application. To be eligible to purchase a Type-R engine, you have to be a part of the company’s HPD Honda Racing Line grassroots support program.

With that being said, we find ourselves asking; is the Type-R engine really worth it? For roughly the same price, you could build your own boosted K-series motor that could put down just as much, if not more power. With patience and a some time spent shopping around for the right deal, you could even find a low-mileage Si and push it past the 300 horse mark for in and around $7,000. Is it worth paying for the Type-R name? Or does building up a motor yourself carry more value? We tend to lean towards the latter, but in the end, that’s all up to you.